When you’ve worked in the Virtual and Augmented Reality world for a while, you start to notice things. You start to notice that AR and VR are secretly hidden in all kinds of pop culture. From music videos to movies and from children’s books to TV series. Examples that haven’t been that obvious in the past, become crystal clear right now. Ready for some of the coolest AR & VR examples in pop culture?

I bet you didn’t see!

I’m not going to name the examples that have been mentioned many, many times before. Yes, we know now that movies like Minority Report and Iron Man show cool examples of futuristic Augmented Reality. But there are plenty of other (very subtle!) examples right now that show just how frequently AR and VR are shown in today’s life. Use the slider to see which cool examples I’ve selected for you.

The notorious commercial where a monster demonstrates having scaring training with Virtual Reality glasses. It was only last year that I rewatched the movie and noticed this scene. Please realize that this movie came out in 2001 and featured VR already!

In this badass action movie all secret agents wear special AR glasses to visually communicate with each other. It’s not only functional, it’s actually a big part of their aesthetic appearance. Looking cool while using AR!

Several episodes of this excellent TV series feature technologies like Augmented Reality (and sometimes even Virtual Reality). Ranging from AR horror games to AR contact lenses that let you record and replay visual memories. One of the main goals of this series is to let you see the dark side of technology, so these episodes don’t always end well…

A young adult book in which the main gaming world can only be visited using Virtual Reality by main character Emika. Very cool that even YA literature nowadays gets inspired by modern technologies like VR!

Only just now a very cool movie featuring a lot of VR got released: Ready Player One. It focuses on a young boy who dives into a VR world called OASIS to find a special Easter Egg, which will give the finder a great fortune. Both VR fans and non-VR fans looked forward to this thrilling adventure, directed by Steven Spielberg. 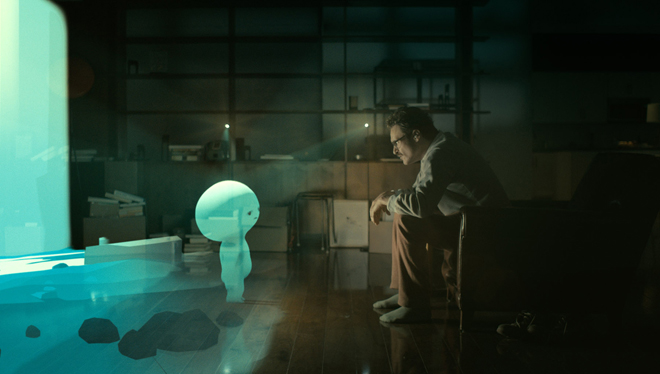 The movie Her is mainly praised for the excellent portrayal of how real Artificial Intelligence can become, but other technologies are hidden in this film as well. Theodore, the main character plays a funny AR game several times during the movie, with a pudgy (very agressively swearing) character that has to explore caves and can be controlled by moving your hands.

Yes, even in music videos! In this Duke Dumont’s video clip the main character wants to escape the rainy, depressing world by ordering a so-called ‘Waiver’: special VR glasses that transport him to a tropical holiday island. Celebrating with friends, falling in love with girls and experiencing bungeejumping is all included in this VR experience.

The Big Bang Theory is obviously known for their nerdy characters and their interest for technological innovations, so it was no surprise when the series featured VR glasses in one of their episodes in 2016. Main character Sheldon was so immersed into the VR world that when he tried touching a virtual butterfly and thereby touched Leonard’s cheek in real life, he scared himself to death.

Find out more or adjust your settings.