Over the past few years we’ve welcomed many interns and graduates. The current generation of interns got the opportunity to get a taste of how to work in a diverse team to create a concept at the Digital Reality Hackathon in a short timeframe of just 2 days. The hackathon in question took place March 4th and 5th and the overall theme was finding ways to use Virtual, Augmented and Mixed Reality technologies to create opportunities “for good causes”.  How can these technologies be used to create a digital reality that helps others? Our interns team accepted the challenge! Read a small report on the hackathon below, written by Marlous,  one of our interns that participated last weekend.

The power of a diverse team

Being an intern at Dutch Rose Media is quite interesting. You get a taste of how a team with expertise such as design, development and user experience tackles a new case, starting with brainstorming sessions, concepting and eventually creating a wonderful application and experience. It’s a process most of us interns get to experience a couple of times during our studies, usually taking up to 4-6 months to complete. At the hackathon we got to do this whole process in a matter of 2 days.

Most of the current interns have only been working here for 3 weeks, so we barely know each other, aside from what we study and what kind of assignment we got at Dutch Rose Media. We all come from different expertises: A game designer, software engineer, digital publisher and geo & media designer. A powerful combination for a hackathon. Arjen from PLYGRND.city joined our team during the hackathon. 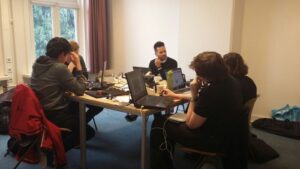 So, at Saturday 9.30 we all arrived at the Van Abbehuis and listened to all the pitches that introduced the 6 challenges, such as helping Children with ADHD come at ease, to give sick children the possibility to travel beyond the walls of the clinic. It was hard to pick one, but we eventually chose the Living apart Together: ‘verFRITS je dag’ challenge. To explain the challenge very briefly:

How can we stimulate social interaction in a vibrant city like Eindhoven? To make a society really social, that’s the quest in the challenge ‘verFRITS je dag’ (reFRITS your day).

We believed that Augmented Reality could be powerful tool to reconnect people with each other again. We analyzed the successful AR implementations such as Pokémon Go to figure out how it made people meet each other in real life and talk to each other. Popular public hotspots such as the park swarmed with people the height of Pokémon Go’s success. But how does one recreate a similar effect, without copying the exact concept and with a focus on the people of Eindhoven instead? And how do you reach out to these people? It took hours of brainstorming, filling several sheets of papers with ideas, theories, but we eventually we came with a concept…

Many people want to be heard, wanting to tell their story, but do not know how to do this. We wanted to provide them with a way to do so. On various locations we would place a special recording “room”, which people could enter freely to participate. With the power of a green screen, we wanted to record the citizens of Eindhoven by asking 3 questions about the past, present and future:

By asking questions like this, you would get all kinds of stories, which is exactly what Eindhoven is all about: a multicultural city with many personal stories and struggles. “Elk huisje heeft zijn kruisje”, to quote a Dutch proverb.

So how does this allow people to meet each other and actually see these videos? By participating, you would have to enter your home address. Afterwards the video got edited for AR use and added to a map in the Story Game AR application. In this application the user got to see the map and neighborhoods of Eindhoven. Starting in your own neighborhood, you would go out to look for a marked location. By scanning the door of said marked location, it shows the video of inhabitant as an augmented overlay. Participants of the video recording also would also get a special marker, proudly proclaiming them to be an “Ambassador of Eindhoven” which they could pin to their front door, so that others could easily find new locations, even with the application turned off.

(Actual screenshot of our working prototype. By scanning a front door using AR, the persons that lives there pops up)

For the hackathon we managed to get a working prototype. The developers in our team made the door of the Van Abbehuis actually scannable, triggering a green screen video of an imaginary citizen of Eindhoven. The map to trigger the scanning process was also implemented.

On Sunday we got to pitch the concept in front of the jury and audience. It went great and we are quite happy with the end result. The main feedback we got from the jury was the privacy aspect of the concept. How would we prevent stalkers and people with bad intent from checking out the participants from afar? It’s why we made participation optional. If you do not want to share personal information, simply not participate. The questions itself are vague enough that you do not have to share personal information either. The actual address and full name of participants wouldn’t be mentioned in the app. And for the scanner to work, one would have to be at the actual location. Of course it’s not a perfect solution, but in an era where we freely share information on social media, it’s the best that can be offered. 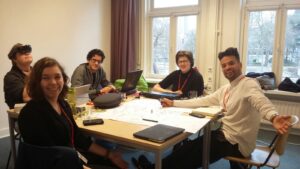 Sadly we did not win any prizes with this concept, but aside from that it was a wonderful experience where we got to meet new people from all kinds of sectors and businesses, even making some friends. We got to tell everyone about Dutch Rose Media.  We learned a lot about AR and VR, got to try out devices such as the Oculus Rift and the HoloLens. Some of us definitely will participate in future hackathons! 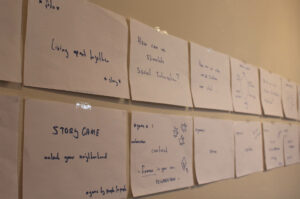 (The walls were covered with ideas, thoughts and demo templates) 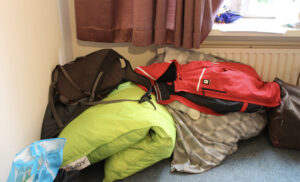