We facilitated our first free Augmented and Virtual Reality workshop back in November 2016. It turned out to be quite a success, since we received many positive feedback and had many satisfied participants. That’s why we organized another workshop two weeks ago and again, it was a very productive morning!

Both Augmented and Virtual Reality are gaining popularity and companies really want to join this long-term trend, but they often have no single clue how to do so. That’s where we come in! We organize these workshops to inform and inspire businesses and help them in taking the first steps for integrating AR or VR technology into their work processes.

In cooperation with Office-S we organized the second workshop last Thursday  the 26th of January. About 20 participants joined the workshop, all from different sectors, varying from architecture to payrolling and from photography to education. 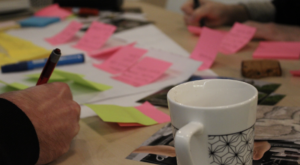 We started the workshop with an inspiration session about AR and VR. During this session I shortly explained how both technologies work, why they are valuable and what exactly is the difference between AR and VR (we at Dutch Rose media don’t like it when people say AR is  “VR’s cousin or sister”, so we’re happy to explain why AR and VR are two different technologies 😉 ). Since I, as the workshop facilitator, have a background in trend research, I always likes to share current signals and microtrends to visualize the story better.

To test the participants’ current knowledge and to give an interactive touch to the inspiration session, I offered short tests in between.

Time to work! During several brainstorm rounds the participants were able to come up with a diverse bunch of ideas. Creativity is key during sessions like these. Participants are first asked to think like the sky is the limit so the most creative ideas are created at first. Later on, those ideas will be refined and polished to make them easier to realize and will add value to life.

During both workshops I was very impressed by how participants from different fields were able to come up with concepts together. Both times the work flow felt great and all the groups came up with innovative and interesting AR or VR concepts. So a big thanks to all the enthusiastic participants!

After organizing these first two workshops, we’ve received many positive feedback and reviews. We gathered some of the original (Dutch) reviews below. Find out what others thought about our workshops!

Want to join an AR/VR workshop yourself next time? Make sure to check our workshop calendar or contact me for more information: fleur@dutchrosemedia.com.

An asset is a file or module from a multimedia application, like audio, video, text, image, but also software modules