We have been developing Augmented Reality concepts since early 2012. Each year we learnt more and more and created even cooler concepts, but sometimes it’s important to look back and appreciate those first AR concepts. And to be honest, some of these first concepts were really cool! This time in the Throwback Thursday post: the Hidden Garden app we developed for a hackathon back in June 2014.

In June 2014 the Huis of Beeld-Cultuur in Breda hosted a hackathon called “Hack the Park!” as a part of the Visual Design Week XS Breda. The challenge of the hackathon was to create cool, innovative and original Augmented Reality games at the Chassé Park in Breda. Four international teams battled to make the coolest game in just 72 hours. The teams were given total freedom and eventually one team won the hackathon and received 2.500 euro. 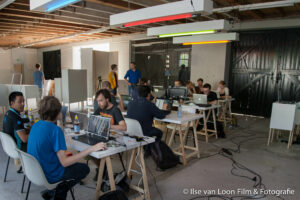 (Photo of the hackathon back in 2014. Can you spot Alex? Photo by Ilse van Loon)

After each team completed developing their Augmented Reality game, we developed the app for Hidden Garden and integrated the games of the teams into this app. The app was available for free at the App Store (it still is!) and the Google Play Store and everyone was able to walk around the Chassé Park and explore the hidden worlds using the app.

When one would walk by a point of interest at the park, they could scan a wall, a door or a specific sign and a hidden game would appear. For example, when people would scan the door called “Breakthrough'” in the app, a magical door would appear in front of the actual door. Players were able to knock down this magical door by firing fire balls and earn points. 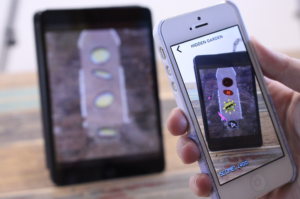 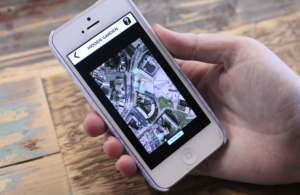 IR is the abbreviation of Image Recognition