Two weeks ago I (Fleur) went on a short citytrip to Copenhagen. For the people whom have never been there: you should definitely visit this modern and carefree city! While searching for a nice place to eat at The Meatpacking District, we stumbled upon Khora. The name and appearance of this location made me think: I’ve seen this before. And yes, in early March last year, I saw this video pass by  on my Facebook feed. I just entered the world’s first Virtual Reality store!

The combination of the authentic white tiles of The Meatpacking District, green plants and old school anatomy posters scattered all over the place make you feel like you’ve just entered some hipster concept store. But nothing could be further from the truth: this trendy appearance covers an innovative VR hub. With hardware like Samsung Gear VR and Playstation VR to Oculus Rift and HTC Vive, Khora has it all. The shop is open all week for curious people who would like to get a free demo and thereby discover the world of VR!

While talking to the lovely hostess Sophie, she told me that Khora was founded about 1,5 years ago by Simon Lajboshitz. I asked about the name of the shop and Sophie smiled. She told me Simon had an interest in philosophy, therefore he chose this name. Khora is an ancient Greek concept used by Plato and is defined as a place between the real and the non-real world. Yes, this sounds like an actual description of Virtual Reality. Their website describes it best as “a bridge between the physical and virtual worlds”. 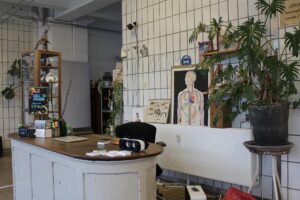 I asked Sophie where the money comes from, since every visitor can get a demo for free. Of course they make money by selling “Khora themed” cardboards, VR hardware (via their webshop as well) and by offering VR experiences and games to visitors (more than just a demo). She also told me that they offer many workshops and events for people who are interested in innovation and technology, and for organizations in education and healthcare. Besides that they develop productions for several clients, varying in all kinds of working sectors. By earning their money from workshops, events and developing productions, they make it possible for people to try out VR for free in their shop. A very interesting business model: earning money so you can use it to make more people aware of the possibilities of VR.

By doing so they are creating their own kind of community in the VR industry in Denmark (and sometimes even international). While being there it became clear to me that their community is alive and kicking already: many people walking in and out for a demo, but also a few VR enthusiasts who were playing VR games (and willing to pay for it). Sometimes I had to pause my conversation with Sophie since the VR gamers were so immersed into their VR world that they were bumping into walls and Sophie had to save them 🙂 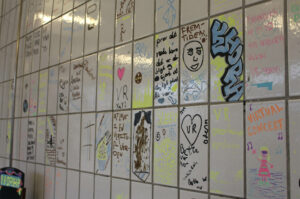 The First (But Not The Only) One

Khora claims to be the first physical VR store in the world and by simply doing some research I can say that’s quite true. It’s certainly not the only one anymore though. Worldwide VR stores and hubs are popping up, even here in Eindhoven with locations like the Smart Venue at the Effenaar. Still Khora has the honour of claiming they’re the world’s first one.

My conversation with Sophie ended with some very interesting subjects (unfortunately the store was closing down so we had to wrap it up). She told me Khora was exploring fields like immersive journalism and E-commerce with Virtual Reality. I’m always glad to hear VR developers are focusing on more than just gaming, since a technology like VR has so much more to offer. Thumbs up for Khora!

All by all it was a very pleasant experience to visit the world’s first VR store and talk to people with the same interests as mine (and ours at Dutch Rose Media). It’s great to see people being so passionate about technology and VR and wanting to offer this (for free) to as many people as possible. I will definitely follow Khora’s next steps!

And yes, I was glad that even my nondigital mom tried out VR glasses 😉 (she thoroughly  enjoyed it!). 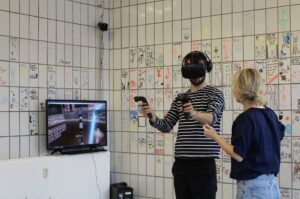