Back in September last year we started a very thrilling project. For ‘PreHistorisch Dorp‘ (the prehistoric village in Eindhoven) we are creating a Virtual Reality and Augmented Reality experience, showing the history of the PreHistorisch Dorp in a very cool way. We truly enjoy integrating new technologies like AR and VR to tell tales as old as time!

PreHistorisch Dorp is a small outdoor museum in Eindhoven, showing history from the prehistory ’till the late Middle Ages. They do so not only by telling about history, but also by showing it with volunteers and actors that dress up in historical attire and reenact ancient events. To make sure all the stories will be told in a great way (even when the volunteers aren’t there) a new and innovative concept is being created, called ‘De Tijdkijker’. 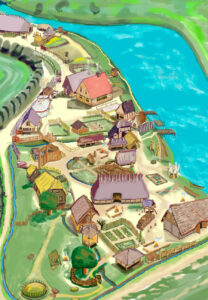 ‘De Tijdkijker’ will take you back in time. Visitors of PreHistorisch Dorp can get special wooden VR/AR glasses, which will look like a Middle Ages’ invention, and use their smartphone to experience history on the spot. By walking a tour throughout the village, visitors will pass by certain locations where it’s possible to watch history come alive. Once arrived at a special location, one looks through ‘De Tijdkijker’ and will get an enchanting AR and VR experience, showing virtual historical characters right in front of you. This way everyone can get the whole experience, everyday and everytime.

To create an experience as complete and excellent as possible, we cooperated with Corporate Trailer, a professional film production company which knows how to create perfect 360° videos. By combining 180° videos and special green screen recordings, it’s possible to create a cool Augmented AND Virtual reality production. An Augmented Reality storyteller that appears in front of you, magically transforms into a historical storyteller. Watch your surroundings slowly transform to the old inn or a prehistorical shack.

Releasing on April 1st (no, this is not a joke!)

While we are currently working on perfecting ‘De Tijdkijker’, several media channels have  gotten ahold of the current developments of this special AR and VR production. The concept was mentioned in an article by Eindhovens Dagblad, at the E52 website and even a short feature by Studio040.

The official release of ‘De Tijdkijker’ will be at April 1st, the official opening of PreHistorisch Dorp.

An online platform that supports every step of the AR process, from creating triggers to showing & managing content and is often supported by both Android and iOS.