Last week was kind of a break-through for social media and Augmented Reality. While Snapchat introduced the new so-called ‘Life Filters‘, making it possible to place 3D objects onto the real world (and making it possible to actually walk around the object), Facebook surprised us with a new feature called ‘AR Studio‘, offering a studio where everyone (beta users for now) can create custom made effects, masks and experiences for the live Facebook camera. So, does this mean Augmented Reality will get mainstream now?

The use of AR in social media isn’t really a new thing. Snapchat has been using Augmented Reality since September 2015, when they first introduced the “Lens ” features. The “Lens” features are the most popular Snapchat filters, transforming human faces into dogs, adding Coachella flowercrowns to faces and making people puke digital rainbows: all in real time. So whenever you choose a filter and move your head sideways, the filter will react to your movement.

It seems like Snapchat started it all. Using Geolocation tags with unique filters linked to locations, the “Lens” features mentioned above and the very popular Snapchat stories (copied by other social media channels like Instagram, Facebook and for a while even by Whatsapp). You could even say that Snapchat can secretly be seen as an AR innovator (but more about that in the Facebook paragraph). 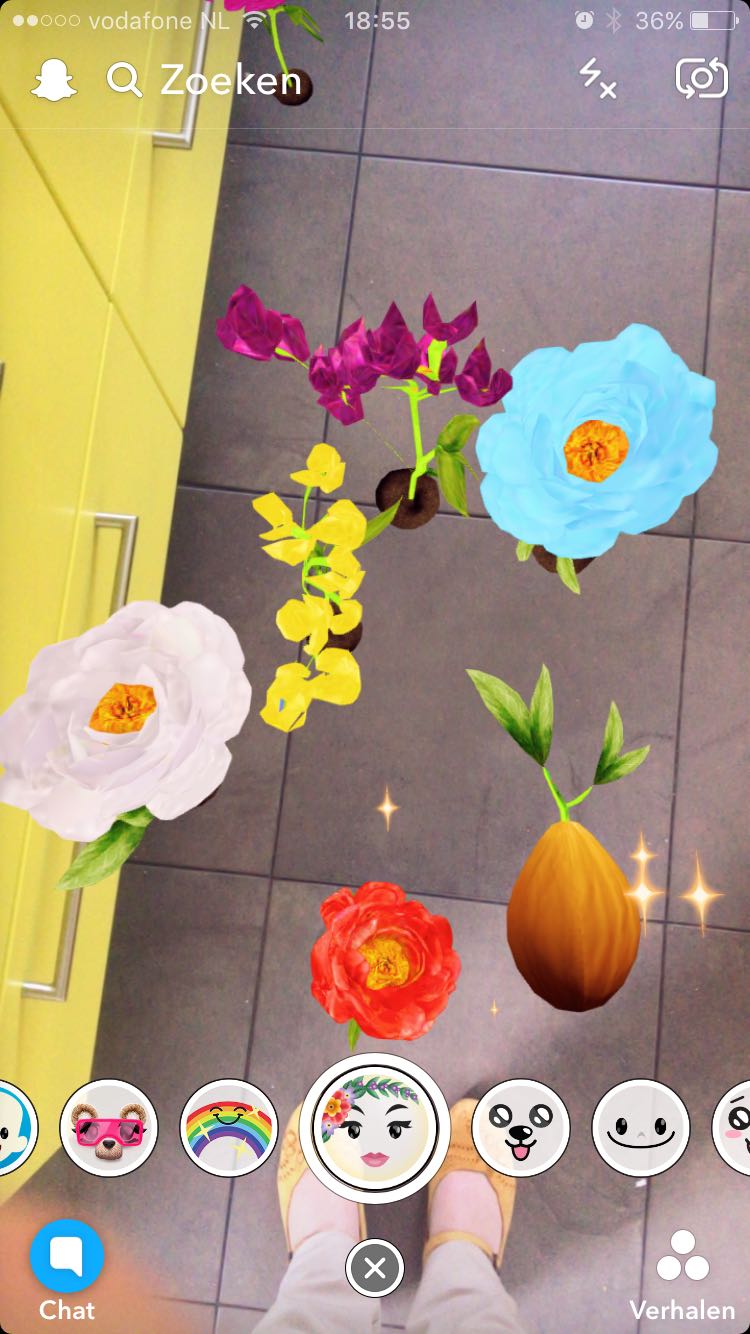 Now Snapchat has added another unique and innovative feature to their app: the “World Lenses”. Digital layers not only for your face, but for your actual surroundings. Whenever you use the Snapchat World Lenses, you can see the app ‘scanning’ the floor, making sure where the floor is located and where the digital 3D objects could be placed best.

Where the Pokémon in Pokémon Go seemed like 3D objects, they actually weren’t, since they didn’t stay in place whenever you moved closer or walked around.

3D objects will then be placed right in front of you. 3D objects like the dancing mushroom in the blog header or the flowers in the screenshot on the left. The impressive thing is that you can actually walk around these 3D objects. They will stay in place while you move around or want to view the objects from above. Where the Pokémon in Pokémon Go seemed like 3D objects, they actually weren’t, since they didn’t stay in place whenever you moved closer or walked around. These new Snapchat World filters show that it IS possible to place 3D objects in reality and walk around them like they are actually there.

And then there’s Facebook newest feature. Well actually, two new features: a new Frame Studio and an upcoming AR studio. We love Facebook, we really do, but it seems like Facebook wasn’t that innovative in coming up with new features lately. They added a “new” feature some time ago which makes it possible to share temporary videos and photos (yes, just like Snapchat stories) and the so-called “new Frame Studio” makes it possible to add a 2D frame to a video or photo (yes, just like some Snapchat filters). But okay, before you think I’m throwing shade: Facebook DID come up with some new elements. Some really cool elements!

When using Snapchat you have to use the filters that are offered by Snapchat. Facebook’s new Frame Studio is more alluring: now everyone gets the chance to create their own frame. This way you can create a custom made frame that fits your personality perfectly. The Frame Studio offers personalized frames on exact locations (yes, Snapchat also did this before), but makes it possible for local (graphic) designers to create and share frames of their choosing, linked to that specific location. This way, adding frames to your content becomes more personalized and unique than regular Snapchat filters.

(Deb Liu (Facebook) explains how the AR Studio can help you with facial recognition, placing AR content over your face that reacts to motion. Source: Youtube)

But enough about the Frame Studio. Through the eyes of AR experts this Frame Studio might look like a ‘simplified trick for using Augmented Reality’. Facebook’s new AR studio is what’s really interesting! Using the AR studio, you can create interactive (3D) masks and effects that respond to actual motion. And the do-it-yourself part, that’s really new. Instead of just choosing an existing filter in apps like Snapchat, people now get the chance to completely design their own AR content, without the coding! Using real-time face tracking you can layer any face. You can do it “without writing a line of code” making it accessible for artists and designers who don’t need any knowledge of coding or AR programming.

You can do it “without writing a line of code”.

In a video where Facebook’s Deb Liu talks about both the new Frame Studio and AR Studio, she states that these new Facebook features will “bring AR to everyday life”, but isn’t that what Snapchat has been doing for the past two years already? The interesting part is that it brings creating AR content to everyday life this way, making it accessible for almost everyone. The AR Studio can only be used by people who register at the moment, but Facebook has big plans for this new feature in the future.

So what do we, Dutch Rose Media, think of these new features by Snapchat and Facebook? Actually, we are excited that Augmented Reality -and especially creating AR content- is becoming more mainstream this way! If by using Facebook’s AR Studio or Snapchat’s Work Lenses Augmented Reality will become more known and popular, it only means that more people will come to understand the value of AR. We are now going to try to create our own version of World Lenses a.k.a. placing 3D objects in reality without letting them slide or move. We can’t promise anything yet (we have a bit less manpower than both Snapchat or Facebook haha), but we have enough passion and motivation to create our own ‘mainstream AR hit’!

A number of things collected or assembled together. By Dutch Rose Media we collect data and content to make our Augmented Reality routes